Ms. Reine Rimón is one of the few jazz vocalists in Europe with a repertoire consisting solely of traditional New Orleans style jazz.

Ms. Rimón is also the only singer in Finland devoted only to this music genre, and the only one performing regularly with professional New Orleans musicians in Europe and the U.S.A.

Ms. Rimón, who currently lives in California, is an International Honorary
Citizen of the City of New Orleans since 1986. In 1996, the Mayor of
New Orleans awarded Ms. Rimón with a Certificate of Merit for her long-time efforts to promote the traditional New Orleans jazz music and musicians to the European audience.

Ms. Rimón´s repertoire includes primitive blues songs by Bessie Smith
and Ma Rainey "the Mother of the Blues"; as well as traditional gospel;
tunes from popular musicals (like The One Mo´ Time); folk songs in
original Creole language; and all the best-loved tunes you can hear at
the famous Preservation Hall in New Orleans. 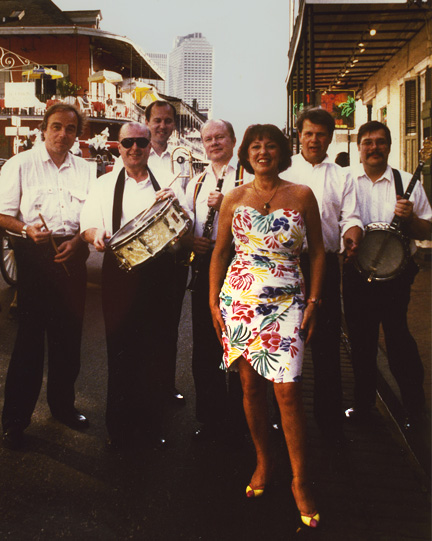 Since the early 1980's, Ms. Rimón has visited New Orleans regularly. She has performed at the New Orleans Jazz & Heritage Festival - the major world event of traditional jazz which averaged an audience of 400,000 people before the devastation caused by hurricane Katrina and the Bush government. Ms. Rimón's references in New Orleans include the Storyville Jazz Hall, the Mahogany Hall, the Maison Bourbon, the Fritzel's, the Norwegian Seamens' Church, and the New Orleans Country Club.

In Europe, Ms. Rimón has performed at all the major jazz fests in Finland, and at several major events in Sweden, Estonia, Germany, Greece, Italy, Switzerland, Russia, and the Netherlands.